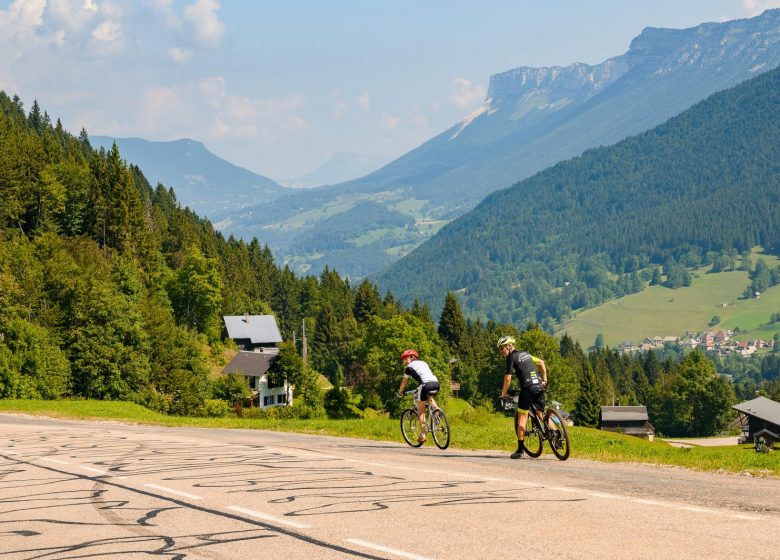 A foray into a monumental and unspoiled nature, which offers all the diversity of the Chartreuse landscapes: forests, leaping torrents and steep cliffs. A course where the sporting, natural and cultural riches parade.

You deserve these panoramas: check your equipment as well as your physical condition before embarking on this somewhat demanding tour. Lighting and a windbreaker will prove useful for certain passages.
(1) In Saint-Étienne-de-Crossey, take the D49 towards Saint-Nicolas-de-Macherin, leaving the football field on the left. About 1 km after St-Nicolas-de-Macherin, turn right on the D49c, direction Saint-Sixte. The road rises, regular and not very steep, in the middle of the pastures.
(2) After Saint-Sixte, stay on the D49c, towards Merlas, then on the D28, towards Miribel-les-Échelles. The climb continues to the Col des Mille Martyrs (884 m), which marks the start of the descent to Miribel-les-Échelles.
(3) On leaving Miribel-les-Échelles, where a refreshment break is possible, turn left on the D49, which goes down to Entre-deux-Guiers.
(4) In Entre-deux-Guiers, at the traffic lights, take the lower street almost opposite, then to the right and immediately to the left, the direction of Saint-Christophe-sur-Guiers on the D520c. Staying on the D520c, cross the village of Saint-Christophe-sur-Guiers and follow the direction of Saint-Pierre-d'Entremont. After Berland, the climb towards Saint-Pierre-d'Entremont begins. Without any particular difficulty, it runs along the Guiers Vivid for several kilometers, passing through the Pas du Frou, a rather impressive corbelled passage! The panorama on the surrounding mountains and the valley cut by the river is superb.
(5) In Saint-Pierre-d'Entremont, in front of the tourist office, turn right, direction Saint-Pierre-de-Chartreuse. When leaving Saint-Pierre-d'Entremont, be careful to follow the D102b on the right which climbs towards Préversin. Here begins the climb to the Col du Cucheron, the most serious part of the route: 8,5 km at 8,3% slope on average with passages at 10%.
(6) Once at the pass, before starting the descent to Saint-Pierre-de-Chartreuse, looking back is worth a little break! In Saint-Pierre-de-Chartreuse, go down towards Saint-Laurent-du-Pont on the D512. The road runs along the gorges of Guiers mort and crosses several short tunnels which require lighting.
(7) In Saint-Laurent-du-Pont, at the traffic lights, turn left, then, 150 meters further, right on the D28 towards Miribel-les-Échelles. Stay on the D28, for one of the last climbs of the route until the intersection with the D49.
(8) There, turn left, on the D49, direction Saint-Étienne-de-Crossey and return to the starting point via Saint-Roch and Ture. At La Rossetière, at the roundabout, take care to take the chemin de la Burletière, in order to avoid the main road axis. At the end of the path, take the D49 on the right. At the intersection, turn right, onto the small prairie path, which will take you back to the starting point.