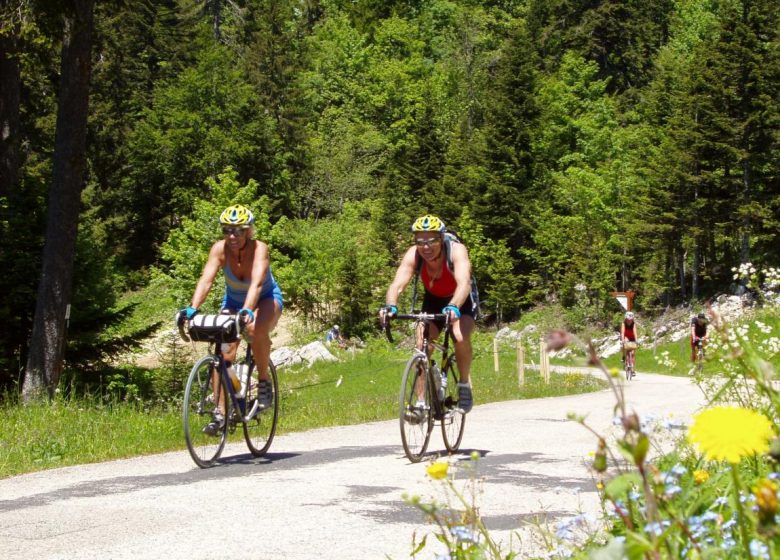 In the Chartreuse regional natural park, this route is dotted with natural monuments, such as the Saint-Even circus, but also great classics of cultural Isère, such as the Grande Chartreuse museum.

From Saint-Étienne-de-Crossey, take the D49 towards Saint-Nicolas-de-Macherin. Just after Le Pilon, turn right to reach Sainte-Sixte.
Then pass Le Burlet and continue on the D28 to Miribel-les-Échelles.
You continue on the D49, pass Les Échelles, Saint-Christophe-sur-Guiers then walk along the Gorges du Guiers Vif to reach Saint-Pierre-d'Entremont.
Then turn right to take the direction of Saint-Pierre-de-Chartreuse via the Planolet.
Turn right to go to Saint-Laurent-du-Pont (D520B) then follow Villette and Basbolin.
Join the D49 and turn left towards Saint-Roche and return to the starting point via Ture.

This foray into the land of the Carthusian monks offers the spectacle of a monumental and unspoiled nature, with emerald green forests, leaping torrents and steep cliffs.

History, culture and heritage : The gorges of Guiers Vif: they are called gorges du Frou under the footsteps of Frou (from the patois frou, which means dreadful). From the top of its 150 meters corbel, the Pas du Frou overlooks the Guiers Vif, the natural departmental border between Isère and Savoie. The road, clinging to the side of the cliff, connects Saint-Pierre d'Entremont to Saint-Christophe-sur-Guiers.

The ruins of the castle of Montbel: dominating the gorges of Frou, (variant of 2 km round trip) occupy a promontory from which one discovers a wide point of view on the Chartreuse. It was the second stronghold of the lords of Entremont, then it became the property of the Carthusians, who were driven out during the Revolution, and finally State property, before being abandoned.

The circus of Saint-Even (8 km round trip variant) is one of the most visited sites in Chartreuse. This impressive amphitheater of limestone cliffs 500 meters high is streaked with four large roaring waterfalls, whose waters come from underground sources of Guiers Vif. The XNUMX hour waterfall trail hike is a must and requires good walking shoes. Another unmissable visit to Chartreuse, the church of Saint-Hugues-de-Chartreuse, called

The Grande Chartreuse museum: in Saint -Pierre-de- Chartreuse, it is located near the monastery. It provides visitors with the keys to understanding the Carthusian order, thanks to a new scenography made up of films, audio-guides and testimonies. An invitation to silence and contemplation.

Tips and Suggestions : Chartreuse liqueur ... and its variations: even if it is not made at the Grande Chartreuse monastery, but in Voiron, Chartreuse liqueur is inextricably linked to the massif and to the monks. It has in fact been produced by the Carthusian fathers since the 130th century according to a secret recipe that includes around XNUMX mountain plants and flowers. Several varieties of liquors are now marketed: yellow, green (sweeter, less alcoholic), vegetable elixir… This liquor can be used in the composition of various products, including chocolates. Thus, those at the Chartreuse du chocolatier Petit, in Saint-Laurentdu-Pont, are particularly famous. Isabelle and Emmanuel Petit welcome the public to their premises, laboratory and store, for a tasting of chocolates and confi series. They explain the making of chocolate, from the cocoa bean to the subtle chocolate-chartreuse blend.
www.chartreuse.fr
www.chocolatier-petit.com