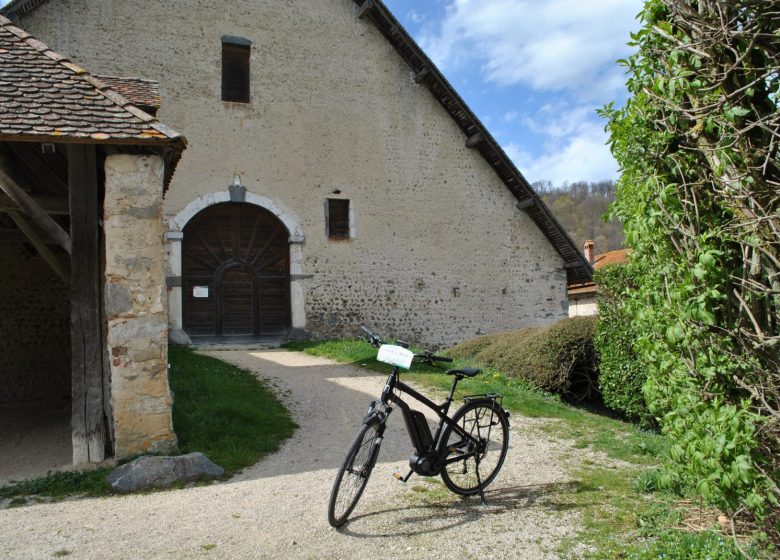 Departing from the Charavines Tourist Office, you will explore three ancient glacial valleys and their rural landscapes today marked by a thousand-year-old history. Recommended use of a GPS (no field markings).

Climbing steeply up Louisias, you will discover two thatched-roofed buildings including the iconic barn. In front of you, the medieval keep of Clermont castle stands out against the sky. After the descent to the barracks (former silk factory), an ascent to a small agricultural plateau will lead you to the Grange Dimière in Le Pin. Dating from the XNUMXth century, this outbuilding of the old chartreuse de la Sylve Bénite is now an exhibition space during the summer.
Via Blaune by taking the road to St-Jacques de Compostelle, you will enter, after passing under the Calvary of Mollard Rond, in the first of the glacial valleys that of Bourbre. The Dauphinoise architecture flourishes there on both sides of your route: former commandery, castles of Pupetières and Molinière, Bourg de Virieu, its market hall and higher after a steep climb (long live the electric assistance!) You will arrive at the impressive castle of Virieu already mentioned in 1107 (visits). Descending on the Pin you will enter the old glacial valley of Surand to Valencogne.
Then by remarkable small panoramic roads you will reach the recently restored Chapel of the 3 Crosses (orientation table, Mont Blanc in good weather) before plunging into the last of the valleys that has preserved its blue lake: the Paladru lake! Through fields and crops, passing a glance at the small fortified house of the Marinière, you will join the greenway which by the edges of the Lake, the Bois d'Amour, the medieval site of Colletière (old excavations) and the municipal beach will bring you back safely to your starting point.

Free information : No markup in the field, we recommend that you use the gpx files on a GPS to complete the route. Bike rental with GPS, inflation terminal, repair at Natura Vélo in front of the tourist office.